The last of January 2021 saw some sensational action at the Sheikh Zayed Stadium marking the fourth day of the Abu Dhabi T10 League. Before taking a look at today’s matches, here is a quick recap of yesterday’s matches. 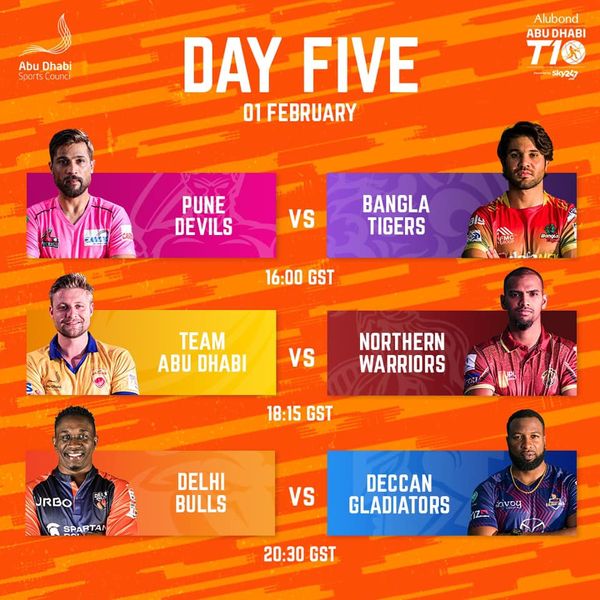 30th of January 2021 saw three matches in total. The first encounter was between the Bangla Tigers and The Maratha Arabians which was won by the Bangla Tigers by 6 wickets. Mohammad Hafeez for the Maratha Arabians was the highest scorer with 61 runs from 30 balls. Mukhtar Ali from the Maratha Arabians was the most economical bowler with 1 wicket and only allowing 13 runs for the opponent. The second match of the evening was fought between Team Abu Dhabi and the Qalandars which the Qalandars won by 9 wickets. Team Abu Dhabi set a target of 100 for 5. Qalandars were able to chase the target in 8.2 overs with just one wicket lost. Sharjeel Khan for the Qalandars scored the highest run of 40 from 21 balls. Shahid Afridi became the highest wicket taker in the match with 2 wickets for the Qalandars. The final match of the 30th was between the Northern Warriors and the Delhi Bulls which was won by the Northern Warriors by 32 runs. Nicholas Pooran was the highest scorer in the matchmaking 54 from just 21 balls while Wayne Parnell of the Northern Warriors became the highest wicket taker claiming 3 wickets in the match.

Here is a brief of today’s matches. 31st of January saw three matches at the Sheikh Zayed Stadium. The first match was held at 1730 hours with Team Abu Dhabi grabbing the victory. The second match of the evening was fought against the Bangla Tigers and the Northern Warriors which was won by the Northern Warriors. The final match of the evening was held at 2200 hours between Qalandars and the Deccan Gladiators which was won by Qalandars concluding day four of the Abu Dhabi T10 League. The first of February will mark the beginning of the Super League stages.

FairPlay News aims to make sports accessible for all ensuring fair news reaches everyone. For more information on the Abu Dhabi T10 League and any other sporting event, fans can visit FairPlay News anytime to stay updated with all the recent happenings.

For more details, Visit on https://fairplaynews.club/

2021-02-01
Previous Post: FAIRPLAY NEWS – T10 Abu Dhabi: The third eve of the battle
Next Post: A new global Mega Industry is emerging in 2021. BLOCKCHAIN ROBOTS will soon be building “Next Level” HOUSING at 80 TIMES